This defect appears as a dented surface on a coil. It is also called dents or c-hook damage. As stated by the name, this defect is caused by a c-hook crane hitting the top of the coil, denting the surface. As a result, the dent gets transferred to subsequent wraps. The defect can be removed by cropping back the material until the dent is gone, typically up to half an inch of the outer diameter material. 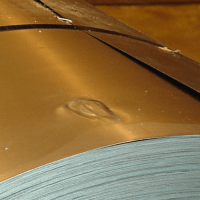 They have a reach that can’t be beat. Mainline will always find a way to make it work.