This defect appears in two different ways: if it is raised, it is classified as a roll mark, but if it can be seen, but not felt and/or does not appear on a paint test, this is classified as a roll bruise. It is also known as hot mill tail end whip marks, dents, or pits. This defect can be caused when a tail-end of a previous coil has variable shape, and passes through the last hot mill finishing stand. The sheet can whip/hit into the roll surface and mark it. As a result, the following coil produced through the hot strip mill will have these bruises on the head end. If the marks on the work rolls are light, the defect only bruises the next coils surface and eventually wears off the rolls due to friction while rolling that coil. If the mark on the work rolls are heavy, the defect can be felt and may affect the next coil rolled for most of the length. The defect may be difficult to see as hot-rolled but becomes more apparent after leveling, temper rolling, and/or pickling. 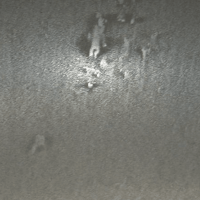 When I have something I need to sell, move, or get off the floor, Mainline is my go to. I know they’ll always work with me to find a solution.